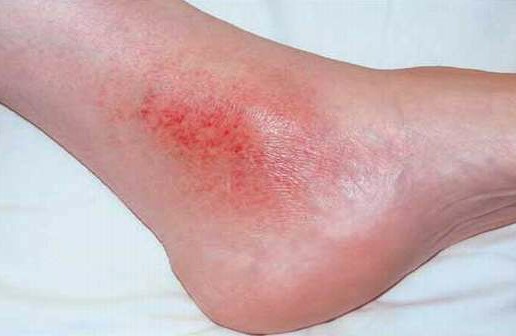 Skin changes of the lower leg may be the first sign of vein disease. These vein disorders originate from the superficial or from the deep vein system and are called venous insufficiency or venous reflux.  While lower leg and ankle skin rash may be caused by other conditions, such as arterial disease, superficial venous disease is the common culprit.

An ankle rash related to venous disease occurs when superficial veins become dilated due to vein valve damage from a higher source in the vein.  This allows backward blood flow, pooling and eventually local inflammation.  The inflammation which is due to the chronic venous insufficiency often leads to a skin rash which causes intense itching and redness.  A skin rash caused by vein disorders is called venous stasis dermatitis and is often overlooked.  It affects the lower legs usually starting with small patches of tiny red bumps that cluster into a diffuse red rash covering the ankles and lower legs.  The rash is usually quite itchy, red and misdiagnosed as a skin infection called cellulitis.

Following a rash, the chronic venous insufficiency causes the surrounding skin area to become dark.  This is called hyperpigmentation and it is due to prolonged inflammation which damages tiny blood vessels and capillaries.  Initially fluid and then red blood cells are able to leak from the damaged vessels and eventually causes swelling and skin discoloration.  The red blood cells contain hemoglobin which carries oxygen to the skin.  Hemoglobin is an iron-based pigment and as it leaks into the subcutaneous tissue and  skin, the brown, iron-base substance is deposited in the skin.  This deposit causes the area, once a small rash, to now appear brown or rust-colored starting at the ankle and progressing up the lower leg.

An untreated venous stasis ankle rash will usually advance and the underlying inflammation process undergoes scarring and fibrosis, damaging the subcutaneous tissue.  This causes the tissue and skin below the calf to shrink and harden. The dark-red or brown plaque-like skin thickening is called lipodermatosclerosis and can be painful.   The patient may notice the decreasing size in diameter of the affected leg or legs.

Skin rashes and skin changes which are actually caused by venous insufficiency are often misdiagnosed as a dermatological problem.  Patients often self-treat or seek dermatological care which delays venous treatment and may allow the condition to progress over time.  Left untreated a patient with venous stasis dermatitis or skin rash may be at risk for skin breakdown and stasis ulcerations.

If you have questions regarding ankle or lower leg skin concerns, call Minnesota Vein Center (651-765-8346) for consultation.