Venaseal is the brand name for a form of ‘superglue’, chemically called cyanoacrylate, which is used in the treatment of vari 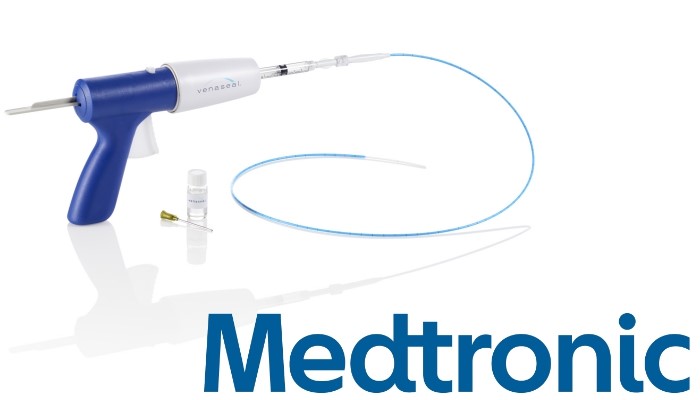 It was originally formulated by a company called Sapheon, but they have now sold the Venaseal brand to a larger company called Medtronic. Venaseal is not the only ‘vein glue’ available on the market.

Venaseal bears a lot of similarities to the superglue you can buy in many shops to use in your own home. However, it has been specifically modified so that it can be used in medical practice. This is because it needs to be used within a vein and so does not set quite as rigidly as the commercial glue product. Therefore, when it has been used in a vein, you do not feel a rigid tube in your leg.Product Summary

What does it contain?

Cyanoacrylate glue is a glue that is exceptionally good at gluing biological tissue together.

Anyone who has ever used superglue at home, and has accidentally glued their fingers together, knows quite how good it is gluing skin! (Do not try this at home!)

In the very early days of developing cyanoacrylate, experiments were done gluing different types of human tissue together including in liver surgery, and in closing skin incisions to avoid using stitches. However, because the market for selling glue products to use at home was bigger, most of the production went into producing superglue commercial sale, rather than in medical applications.

However, there have still been some uses for glue in medicine and biology which have been used for many years.

Venaseal was invented by Dr. Rob Rabe, an interventional radiologist in America. He used a similar glue to block off vessels that were bleeding, particularly in the case of brain aneurysms. He realised that if you could block off these high pressure vessels by injecting a glue down a very thin cannula, under x-ray control, then there was no reason you could not do this in bigger vessels such as varicose veins.

He then developed the cyanoacrylate polymer, which is a liquid/gel when injected into the vein and then hardens when in contact with fluid. He had to develop a compound of cyanoacrylate that was not rigid so that the treated vein did not feel like a “rod” in the leg whilst it was healing.

There have been a lot of research studies looking for any adverse effects of the cyanoacrylate glue in the body, but none have been found in humans. It appears to be very safe when used correctly by specialists who perform a lot of endovenous treatments, i.e. vascular surgeons who treat vein conditions.

How does it work?

As with all endovenous surgery for varicose veins nowadays, Venaseal is performed as a walk-in, walk-out, local anaesthetic procedure.

Having previously had your varicose veins diagnosed you would visit a specialist clinic for treatment to address the cause. Once changed out of your closes into surgical gowns, you will lie on the operating couch and the couch is tipped head up to fill the veins up in your legs. A vascular technologist marks where the main veins lie under the skin, using ultrasound, and then you stand up whilst the bulging veins on the surface are marked.

You will then lie back on the couch and your leg is cleaned with disinfectant fluid. Sterile operating sheets are placed around you and your leg. One local anaesthetic injection is then performed somewhere usually just above or below the knee. Under ultrasound guidance, a needle is passed into the vein. A wire is then passed up this needle, and the needle removed, leaving the wire in the correct position within the vein. Using this wire, a thin tube or catheter is passed up the vein, again under ultrasound control so the practitioner can see where it is going. It is placed just short of the top of the vein where it joins the deep vein.

The operating couch is then tipped head down to empty the vein of all blood. Pressure is applied to the top of the vein with the ultrasound tip. The surgeon injects a set amount of the Venaseal glue and pulls back the catheter. A period of time (usually three minutes) is then waited whilst the glue sets. This is important as this glues the vein shut.

The surgeon then injects a further set amount of glue, pulls the catheter back 3cm and waits another 30 seconds for the glue to start to set. This is continued for the whole length of vein that needs to be treated. Once the vein has been completely glued through the whole length, the catheter is removed and a little plaster is placed over the pinhole where the operation took place.

The use of Venaseal in an operation can be combined with other procedures, such as sclerotherapy, which may need to be done on other veins in the leg(s) during the same operating session, depending on the vascular problems that you have.

Your leg is usually placed in a support stocking and you will be asked to get up to walk about immediately (with assistance if required).

What does it claim to treat?

Venaseal glue should be used to close refluxing truncal veins such as the great saphenous vein, small saphenous vein and anterior accessory saphenous vein. Recent reports have also said it can be used for incompetent perforating veins using the TRLOP (TRansLuminal Occlusion of Perforators) technique.

It is important to note as with all endovenous (inside the vein) techniques such as endovenous laser ablation, radiofrequency ablation, TRLOP and MOCA (Mechanical Occlusion and Chemical Assistance), e.g. Clarivein, that all of these techniques treat the underlying refluxing veins (which are deeper inside the body) that cause things such as varicose veins, thread veins and skin damage that can be seen on the surface. They are not treatments for the varicose veins themselves, but they are essential to be used as part of the treatment for varicose veins and these other visible conditions.

To find out more about VenaSeal and vein treatment options call at 651-765-8346,  Minnesota Vein Center